So I married the parts manager

Okay, so technically he wasn't the MINI parts manager anymore when we started dating, but still... The only reason we met is because that was his job and I was just another crazy MINI customer. Seriously, I eventually found out that I was referred to as "that crazy MINI chick." ...and I am, but I digress...

I first set foot in Prestige MINI back in the spring of 2007. I went on a test drive, designed the exact car that I wanted, and tracked it from its "birth" over in England until it arrived in NJ. I named her Moxie and she was what launched my obsession with everything MINI. 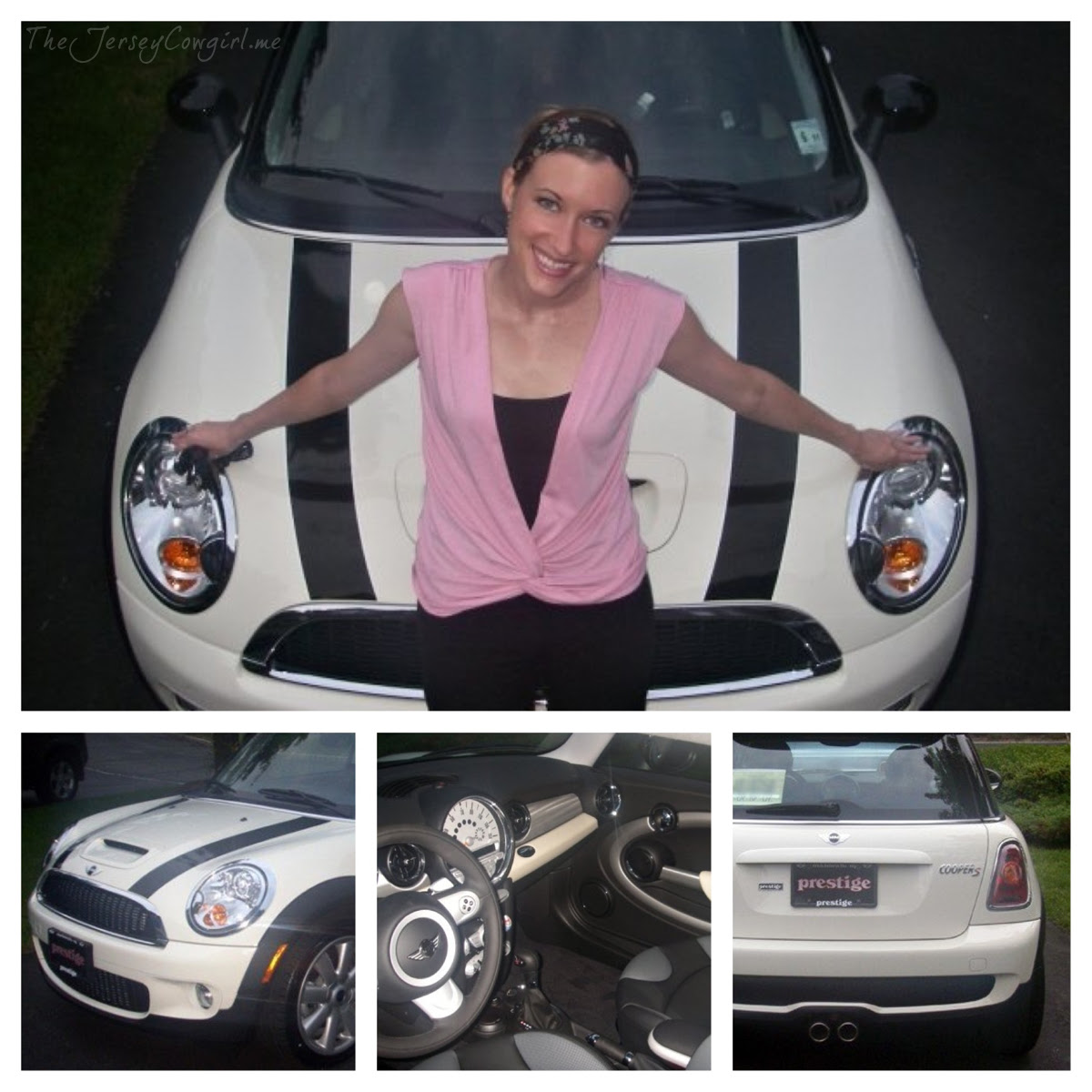 Here is my much younger self, clearly elated with the new baby she just brought home.

I was 25 and psyched that I had this awesome car. Perhaps I should've taken it as a sign of things to come when her windshield got smashed just a couple of months after bringing her home. If you've never had a brick come flying off of a truck and smash into your windshield directly in front of your face while driving, I'll give you this little bit of insight: It is really effing scary. Luckily the windshield held, and only shards of glass and a tiny piece of brick came into the car. Saving my face from undoubtedly, painful destruction. In the end, Prestige rushed to get her fixed, I was ecstatic, and shortly after that, a new parts manager was hired...

I was always in and out of Prestige for various reasons that first year that I had Moxie. I needed some touch up paint for spot on her door, she was due for an oil change, or I just wanted a car wash. Then things started to get real: timing chains, fuel pumps, oil leaks, engine rebuild. I was there constantly, and I was pissed off a lot. It became almost a joke with how frequently something would go wrong with Moxie... like I was making up issues just to come in. I wasn't, but it still earned me the title of the crazy MINI chick.

I eventually got to know pretty much every person that worked there. My car would show up and I could practically hear everyone groan before I even walked into the building. "Oh God, what's wrong now?" The only person I never spoke to was the parts manager. My car was under warranty, so there was really no need, but he couldn't even be bothered to so much as say 'hey' to me?! He knew who I was. For God's sake, everyone knew who I was. I basically lived there. So I wound up writing him off as kind of a jerk. [He tells me now that I "ignored him for two years" and that it's my own fault.]

Time passes, Moxie gets custom pink stripes, I get a custom MINI tattoo, and my reputation as being an insane MINI chick is further solidified. I'm always there with more car troubles, but this guy still can't be bothered to say hi, even when I'm sitting there right in front of the parts counter in the damn waiting room. Fine, be a jerk. Granted, a good-looking jerk, but still a jerk.

Eventually we spoke once. I was there for yet another service appointment, and he came over to make fun of my service advisor. For the life of me I can't remember what joke he made, but it was funny. He seemed surprised that I laughed, but I can't say that I blame him. I was really good at getting really bitchy about Moxie's issues. And then, he was gone. He went over to Prestige's BMW store, and I kept going to MINI.

More time passes and I became friends with some people from MINI. Suddenly I am actually able to go to the dealership on good terms instead of only being there for car issues. One of those "good" times, I'm there with cupcakes... and who do I bump into while walking with my friend? It's the parts manager! We get scolded for not having any cupcakes left for him. I later come to find out that he is friends with my friend on Facebook. Comments pass between us here and there, and I realize that he's actually kind of a cool dude. So now we're Facebook friends... and you know nothing is real until it's on Facebook.

A few weeks go by, I'm still doing MINI stuff, we converse via Facebook more, and eventually we decide to hang out. We tell no one. Technically, I'm a customer and he's an employee. This goes on for weeks. Is this seriously the guy that I wrote off as being an uptight jerk?! He's so much fun! It gets to the point where we're together everyday as soon as we're done with work... eventually we decide that we're actually dating, and go public. And guess what? Nothing bad happens. He still has his job, I still handle my own Moxie-issues, and all is right with the world. He even started to go to Prestige's MINI rallies with me, which was awesome because everyone loves him, so his old customers were happily surprised to see him there.

Life goes on. We move in together, Moxie loses her engine for a second time, and we retire her for Minja in January 2011. From that point, life kind of got a little crazy... not MINI chick crazy, just general crazy. We left our jobs, families, friends, and most of our furniture behind, and moved to Texas. We bought a house, another dog, a pickup truck, and firearms. Life is good.

We even bought a new MINI. This is Etzio... 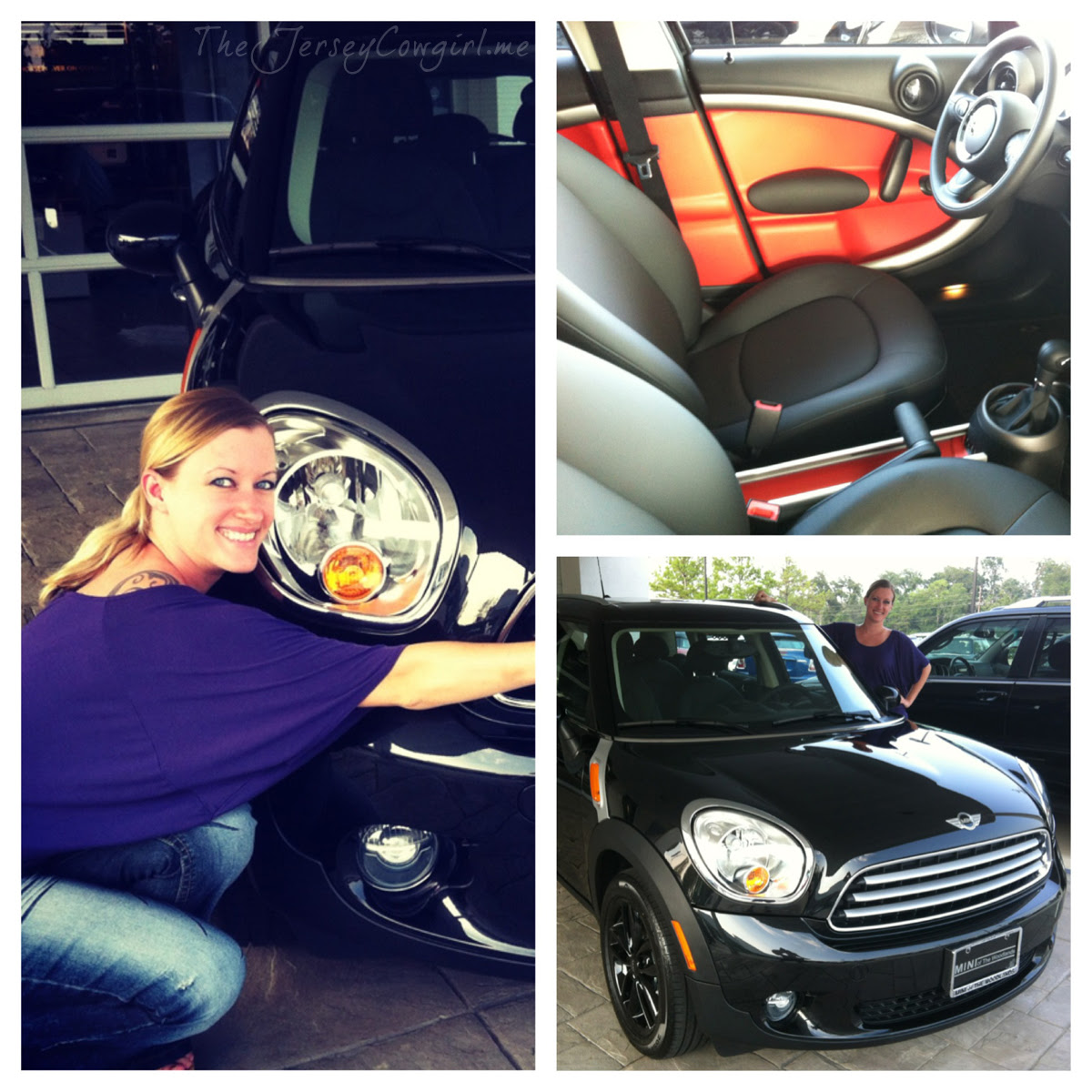 The parts manager and I got married a couple of weeks later, on July 15, 2012. It was the 2-year anniversary of when we started dating, and another one of those things that we told no one. Apparently, that's just how we roll. If nothing else, our life together is never boring.

In a matter of years we went from strangers in a MINI dealership, to husband and wife. And in even less time, we went from New Jersey natives to Texans. It seems like our relationship revolves around change, and while that may be true in some aspects, the best part about us is our stability... kind of like a MINI: Our wheels are moving us forward, sometimes at very high speeds, but we're stuck to the road through any twists and turns that are ahead. And we're gonna have a damn good time enjoying the ride. Motor on, y'all. 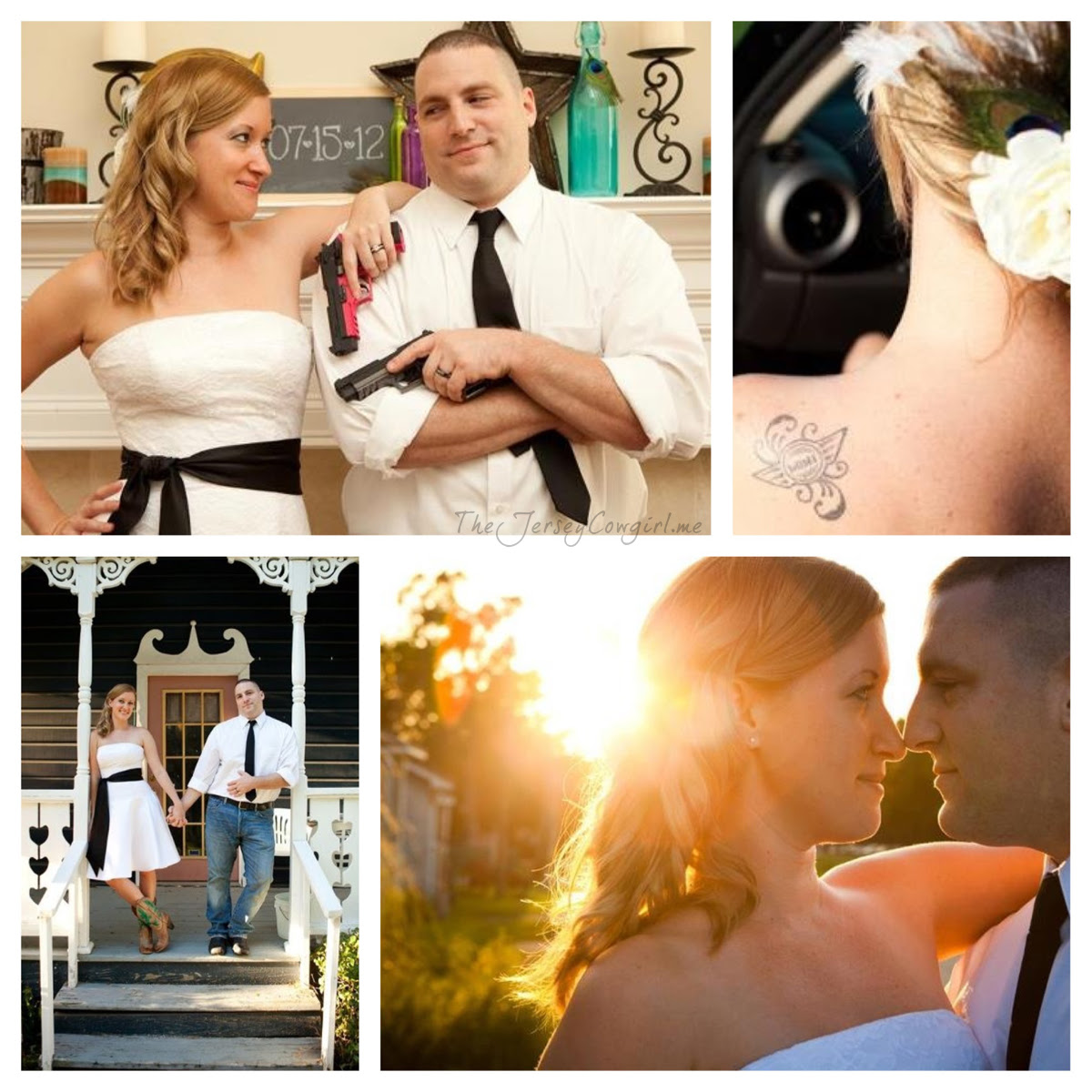 Posted by The Jersey Cowgirl at 4:39 AM No comments:

This is yet another Pinterest find from my Sweets & Treats board. J loves freshly baked cinnamon rolls on mornings when he's not working, but (in my opinion) that gets pretty boring after a few weeks. I was looking for something simple to alternate with the cinnamon rolls. It had to be easy, fairly quick, and something that was baked. Here is what I found: 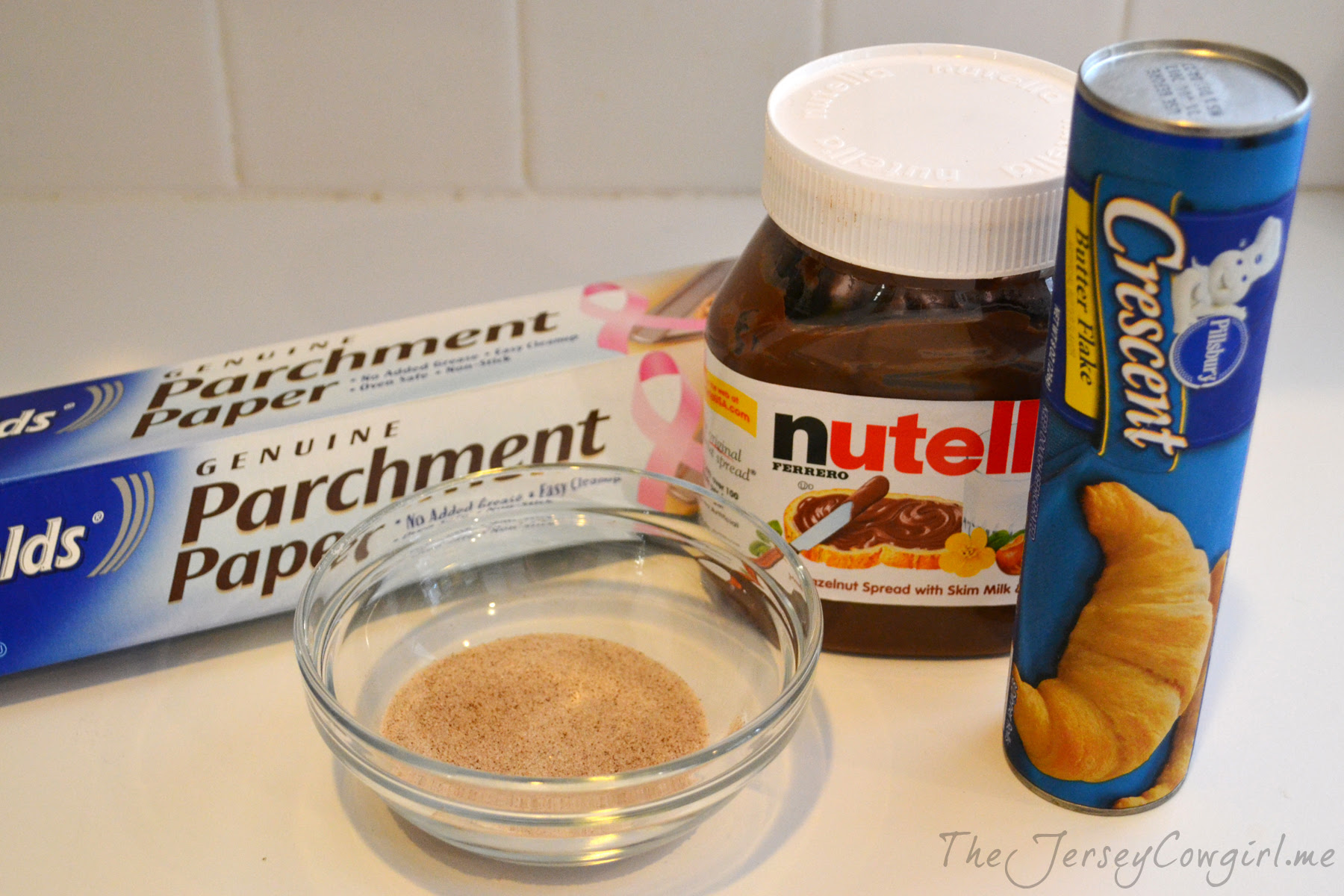 This recipe is extremely versatile and could be made with a number of different fillings, such as peanut butter, chocolate, or even bacon (served with maple syrup dipping sauce). Use your creativity, and enjoy!
Posted by The Jersey Cowgirl at 5:55 AM No comments: 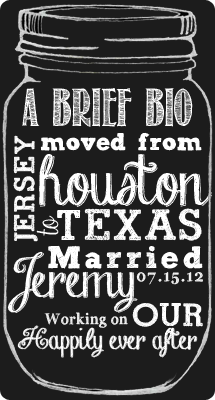